US stocks advanced by 0.59% despite the trade war being ramped up another notch. International stocks jumped, +2.63%, helped by a falling dollar, which declined by 0.55%. Interest rates were up across the board, and the spread between the 10 and 2-year treasury increased by 5 basis points to 26. The 10-year note broke through the 3% barrier and is yielding 3.07%.

Trump upped the ante in the trade war battle by implementing the tariffs on $200 billion of Chinese products that he had previously threatened. The tariffs start at 10% and then go up to 25% by year-end. China responded with $60 billion. Trump then said he would hit back with another $267 billion. When economists talk about how trade wars start and turn from something small into something big, this is the playbook. And Trump and his Chinese counterpart are playing their parts perfectly. Should Trump go all the way with the tariffs as described, Oxford Economics is forecasting a 1% hit to GDP. Expected growth next year per the Federal Reserve is about 2.4% (before the trade war). 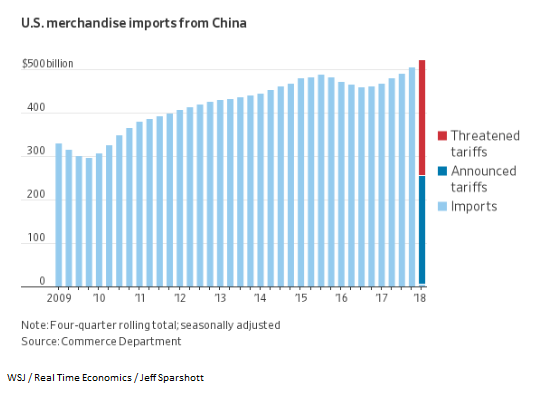 The US is right in that China does not trade fair regarding technology transfer and intellectual property. Trump’s obsession with China’s trade surplus is wrong. The administration also has not laid out exactly what they want, leading some to believe that Trump really does not want a deal, and the tariffs are more about hurting China than trying to build a better economy.

Chinese company Alibaba said they would not add a million US jobs they had promised at an earlier point.

Trump’s hardline approach may or may not ultimately work, but in the meantime, as the tariffs eventually work their way through the economy, businesses and employees will suffer, inflation will increase, and growth will either slow or decline.

Randall Forsyth writes in his weekly “Up & Down Wall Street” column in Barron’s that Stephanie Pomboy of MacroMavens has been warning about corporate debt. Corporate interest expense is at a record, even while interest rates are still relatively low. But given the excessive debt burden, companies will be cutting back borrowing by 14.6%, compared to the prior year, an indication that slowly increasing interest rates are causing pain. Pomboy argues that equities have been rising with global central bank stimulus for years now, and when that ends early next year, interest rates will rise further, cutting into corporate profits, and the fuel that has driven this long rally will be spent.