Markets fall worldwide. Emerging markets are now in a bear market. Tech stocks fall by the most since March.
Nonfarm payrolls are up by 201,000 in August. Wages increased by 2.9%, the most in this expansion.
The strongest ISM report in 14-years.
Global PMI continues to slow but still in expansionary mode.
The Goldman Sachs Bull-Bear indicator is flashing its biggest warning since the 1970s.
More drama in DC with the release of Bob Woodward’s new book and an anonymous op-ed in the NY Times.

Markets around the world fell. US stocks were down by 1% and international stocks fell by 3%. Emerging markets equities entered a bear market (see below) and there is fear of contagion. Bonds fell by 0.35% on a rise in interest rates. The US economy continues to show strength.

The NASDAQ, composed primarily of technology stocks, dropped 2.6%, its worst performance since March. Social media stocks were under the spotlight as they returned to testify in front of Congress about foreign influence on elections. The Department of Justice said it would investigate the “stifling” of voices on social media. Semiconductor stocks dropped on lower earnings expectations. Stocks were hurt further on Friday when Trump said that an additional $267 billion in tariffs on China, on top of what was previously announced, is now on the table. Tesla dropped by 6% to $263 when Elon Musk was shown smoking marijuana in an interview.

Nonfarm payrolls increased by 201,000 in August and private-sector wages increased by 2.9% year over year. The unemployment rate remained unchanged at 3.9%. The 2.9% increase in the wage rate was the highest of this expansion. While that is good for workers, it could cut into corporate profit margins and give the Fed more leeway to increase interest rates.

The ISM Manufacturing Index jumped higher in August to 61.3, up from 58.1. That is the highest level since May of 2004 and indicates strong growth ahead. However, according to the ISM report, “Respondents are again overwhelmingly concerned about tariff-related activity, including how reciprocal tariffs will impact company revenue and current manufacturing locations.” 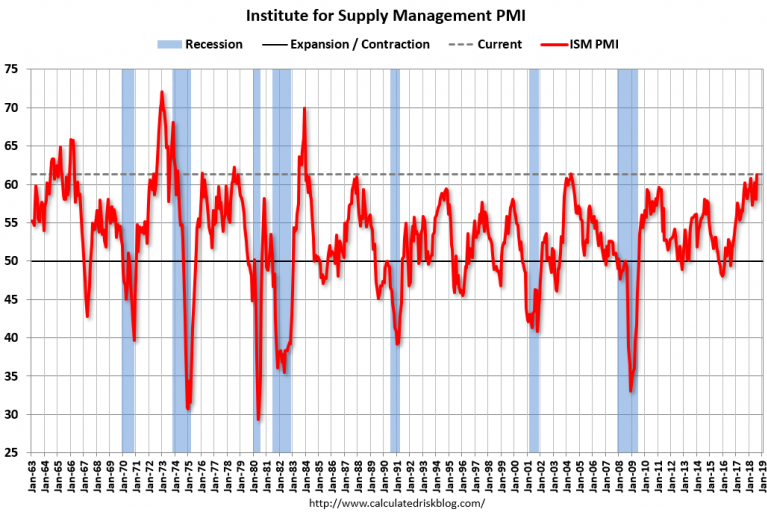 The Global Manufacturing PMI fell by 0.3 points in August to 52.5. It was the seventh drop in eight months. But the index remains in expansionary mode (greater than 50) for the 30th consecutive month. Developed markets, led by Europe turned in better numbers than the emerging markets.

The Philly Fed State Leading Indexes project growth in 49 states over the next six months, however, growth rates are expected to moderate.

The Goldman-Sachs Bull-Bear Indicator, which relies on five market factors, is flashing its strongest warning signal since the 1970s. High stock market valuations and a tight labor market are two of these key factors. However, Goldman is not anticipating a deep bear market, but they are forecasting lower returns ahead. Moderating factors include a low-interest rate environment, subdued inflation, and an accommodative monetary policy around the world. 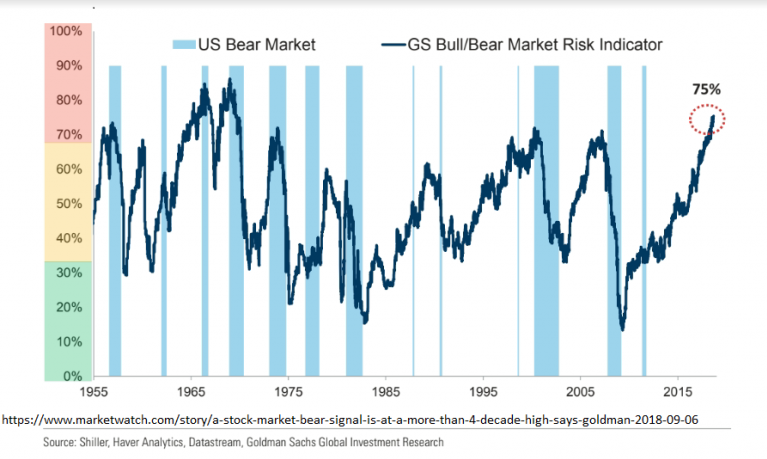 Emerging markets dipped into bear market territory on Thursday. The MSCI Emerging Markets index is now off just more than 20%. A fall of 20% or more is considered a bear market. A rising dollar, trade tensions, and falling commodity prices shoulder most of the blame. The rising dollar makes it more difficult for countries with debt denominated in the US currency to repay their loans. Rising trade tensions could put a damper on global trade that some emerging market countries count on, as well as lead to an economic slowdown. Raw-material prices are down about 10% since the May peak. Emerging market countries like Brazil, Chile, and Indonesia are major commodity exporters.

Bob Woodward’s new book, “Fear”, was published and paints a portrait of a dysfunctional White House. And the NY Times published an op-ed by an anonymous author who is supposedly a senior official in the White House. The piece says that there is a group operating to control the worst instincts of Trump and to basically act as the adults in the room.