Turkey’s currency, the lira, dropped by more than 14% on Friday as their President instructed citizens to sell the dollar and gold and buy the lira. President Recep Tayyip Erdogan said that “This will be in response to those who have declared an economic war.” He blamed the “interest rate lobby” that wants Turkey to raise interest rates.

Trump later tweeted “I have just authorized a doubling of Tariffs on Steel and Aluminum with respect to Turkey as their currency…slides rapidly downward.” Combined, the dual Presidents comments led to a sell-off around the world.

In recent years Turkey appeared to have a strong economy. But that was a disguise, as the economy was boosted by taking on heavy debt denominated in foreign currencies. Now the bill is due and as the lira falls, the pain increases.

US stocks did not suffer much, finishing just about even for the week. The damage was overseas where international equities dropped by 2% and emerging markets were down 2.3%.

BULLISH BETS START TO PILE UP

As US stocks were close to records on Thursday, traders were wagering big on a continued bull run. Bullish call options, which cash in on higher prices, have increased in volume on the S&P 500. At the same time, bets on low volatility have hit the highest level since November, according to the Commodity Futures Trading Commission, indicating that traders expect the market to move slowly higher. 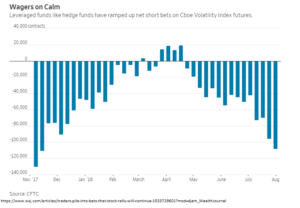