US stocks were up for the week by 1.72% and closed at a record high on the back of strong earnings reports and a hoped-for interest rate cut coming up this week. UPS, Google, Twitter, and Starbucks all had strong earnings. Q2 GDP was up by 2.1% in Q2, better than the 2% consensus estimate, but the International Monetary Fund cut its worldwide growth prospects for 2019 and 2020, by 0.1%, to 3.2% and 3.5%. This is on top of earlier cuts, blaming trade tensions. Referring to trade, the IMF wrote that "Global growth is sluggish and precarious, but it does not have to be this way because some of this is self-inflicted."

The U.S. economy expanded by 2.1% in Q2 with the help of a strong consumer. That was down from the 3.1% clip in Q1 but higher than anticipated. Consumer spending increased at an inflation-adjusted annualized rate of 4.3%. Uncertainty over trade was a factor in causing business investment to fall by 0.6%. Exports fell by 5.2% while imports were up slightly. 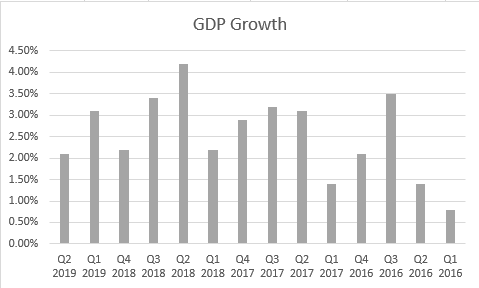 Congress and the White House reached a deal that makes everyone happy, except those who care about the fiscal soundness of the United States. The deal suspends the debt ceiling until July of 2021 and allows for more than $320 billion in spending above the limits set in the 2011 budget law. Republicans got higher spending for the military and Democrats got more spending for everything else.

Boris Johnson became the new Prime Minister of Britain, increasing the chances of a hard Brexit in October. Johnson seems confident he can negotiate a new deal, but that might be a problem since the EU has said repeatedly that the pact is non-negotiable. Furthermore, Johnson's grip on government is fragile at best, he is part of a minority government that is essentially holding on by a string, subject to the whims of just three defecting lawmakers.

The ECB is signaling that it will cut short-term rates and restart their bond-buying program sometime soon. ECB President Mario Draghi says the economic outlook "is getting worse and worse", especially in manufacturing (see below). Draghi is aiming to overshoot the banks 2% inflation target.

Germany purchasing managers index dropped to 43.1 in July from 45 in June. "The health of German manufacturing went from bad to worse in July...raising the risk of the euro area's largest member state entering a mild technical recession," said Phil Smith, an economist at IHS Markit. Germany's services PMI still remains in the expansionary territory at 55.4, as does the composite at 51.4.

West coast home prices have declined for the first time since 2012 and home sales across the country fell by 2.2% in June, another indication that the long-awaited recovery in home sales has not yet arrived.