The market tumbled on Monday as trade tensions flared up again. There were reports that Chinese companies would not be allowed to invest in the US. Treasury Secretary Mnuchin called it “fake news”, and then White House trade adviser Peter Navarro suggested that it is a possibility, although it would be aimed at any country that tries to steal US technology.

For the week overall, stocks fell in the US by 1.42% and it was another down week for international equities, falling 1.06%. For the first half of the year, US stocks were up 3.20% (including dividends) while markets outside the US were down by 3.52%.

Interest rates fell during the week and the bond market rallied by 0.36%. The yield curve remained steady for the week, at 33 basis points. Its lowest point of the year. An inverted yield curve, where the short-term rate is higher than the long-term, has preceded recent recessions, usually by about 6 to 24 months. The curve has not inverted yet, but it is moving in that direction.

Q1 GDP was revised down to 2% from 2.2%. However, expected growth for Q2 is significantly higher, the Atlanta Fed’s GDP model is now estimating growth of 3.8% annualized.

Oil prices surged by about 8% for the week helped by a US effort to close markets for Iranian oil. A barrel of WTI crude closed at $74.15, the highest price of the year. A run-up in oil prices has sometimes been associated with the ending stage of a bull market. But there is an argument to be made that this recent spike has more to do with political issues, such as Iran, than fundamentals, and thus might be temporary in nature.

The Barron’s cover story this week calls for the end of the bull market in 2020. The article cites the fading of the tax cuts stimulus, higher interest rates (in the US and Europe), a smaller Fed balance sheet and slower growth in corporate profits. Of course, there could be factors that change the timing. For example, a trade war could accelerate the end of the bull market, and adjustments to the Fed’s interest rate path could lengthen it. Respected market strategist Ed Yardeni says that “The bull market will last as long as the economy expands. I don’t know anything today that leads me to put a time frame on when this bull market ends.” 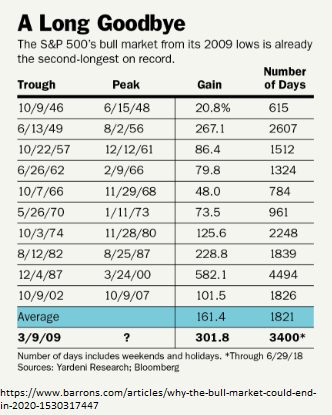 The Bank of England warned about growing risk in global debt markets. The Bank says that it sees areas of risk ranging from US corporate debt to risky loans in Britain to foreign currency lending in emerging markets.

BOE Governor Mark Carney said, “The recent tightening in global financial conditions could be a precursor to a much more substantial snapback in world interest rates and more challenging bank, corporate and sovereign funding conditions,” he added that growing protectionism “could sap some of the current strength of the global economy.”

The Bank said that US corporate borrowers may struggle to repay loans if rates rise or global growth stalls.