US stocks were up by 2.71% and international stocks advanced by 1.77%. The Dow Jones Industrial Average is now on an 8-week winning streak. Stocks were helped by positive news on China. Trump said if negotiations with China are going well, he would consider delaying the deadline before the next increase in tariffs are scheduled to start: "If we're close to a deal...I could see myself letting that slide for a little while." Congress agreed on a compromise to avoid another shutdown, although Trump then went on to declare a "national emergency” to try to get the balance of the funding for his wall that was not included in the compromise bill.

The market continues to go up despite economic news that has been negative. The OECD US Composite Leading Indicator fell by 0.2 to 99.4 in December, it was the eighth straight decline and the lowest level since October of 2016, indicating below-trend growth. The six-month annualized rate of change is declining at the fastest pace since January of 2016.

Retail sales for December came in way below expectations. The data was delayed to the government shutdown. The number showed a 1.2% month over month decline, which would be the biggest drop since September of 2009. However, many economists are of the opinion that the number just does not add up with the other reports from December, in other words, there is a mistake in the data. The retail sales report is often subject to big revisions so time will tell.

As a result of the weak retail sales report, the Atlanta Fed's GDPNow model dropped forecasted Q4 growth from 2.7% to 1.5%. Obviously, a big negative change.

Job openings hit an all-time record in December. Openings were greater than the number of unemployed by 1.04 million. However, jobless claims were up by 4,000 to 239,000 last week. The last couple of weeks have been higher than the prior trend. The four-week moving average is at its highest point since January of 2018. 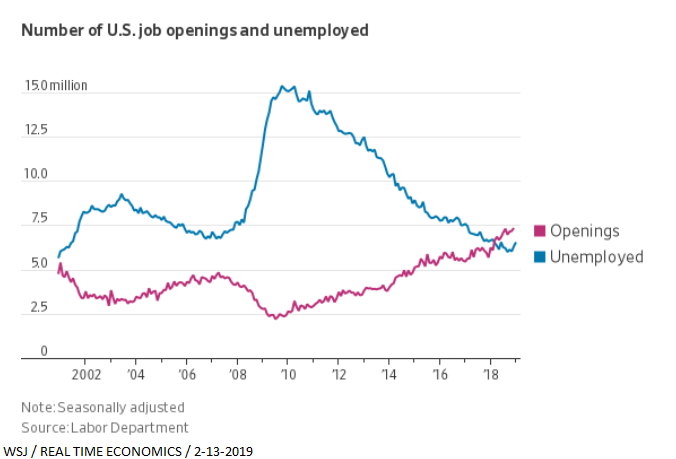 Amazon backed out of their plan to move to NYC after weeks of protests. The proposed deal, that was negotiated by the Governor and the Mayor, included about $500 million in capital grants and about $2.5 billion in incentives. The $3 billion investment would be over 10-years, but the payoff would be $27 billion in tax revenue over 20-years, 25,000 jobs at an average pay of $150,000 per year, plus all of the positive multiplier effects from having what is probably the world's best-run business and technology company in NYC.

But that wasn't good enough for many of the politicians and "progressives", who immediately went into attack mode from the day the deal was announced. There were problems with the proposed deal. Mainly that local leaders were kept out of the loop as the Governor and Mayor conducted the negotiations. And then an argument could be made that New York gave away too much to lure Amazon in. But even with that, this was a huge win for NYC and $27 billion in tax revenue for a $3 billion-dollar investment over 10-years adds up to a positive present value at just about any discount rate!

The political backlash against Amazon was overwhelming, and on Thursday, the Company announced it would pull out of the deal. Incredibly, the activists and politicians celebrated, as if they had accomplished something good for their community. Here is what Representative Alexandria Ocasio-Cortez (AOC) said, "We were subsidizing those jobs, the city was paying for those jobs, so frankly, if we were willing to give Amazon $3 billion for this deal, we can invest those $3 billion in our district ourselves if we wanted to."

So according to AOC, New York can now go and spend that $3 billion in the local community, right? Wrong! You would think that a member of Congress from New York would understand basic financial math. Apparently not. What the Representative from New York does not understand is that with the exception of the $500 million in capital grants, the remaining $2.5 billion was structured mostly as tax breaks out of future tax revenue that, guess what, does not exist now. $27 billion in future tax revenue was just lost.

NY Governor Cuomo said "a small group of politicians put their own narrow political interests above their community - which poll after poll showed overwhelmingly support...above the state's economic future and the best interests of the people of this state. The New York State Senate has done tremendous damage. They should be held accountable for this lost economic opportunity."

The real message here is the danger that is lurking on the extremes in both political parties in the US. It manifests itself in different ways. On the Democratic extreme left, attacks on business and wealth creation may make great politics, but it is bad for the economy and the very people that these politicians supposedly represent. Creating an unfriendly and extremely difficult environment for business will mean less of it.
As the saying going, "be careful what you wish for, you might just get it." Well, New York just got it.