Stocks advanced and were helped mightily by a Fed press conference mid-week. Fed Chairman Jerome Powell said, "I would want to see a need for further rate increases," referring to an increase in inflation. And then to make it even better, the Fed signaled that they would maintain their balance sheet at a higher level than previously thought, indicating that the unwind of the balance sheet might be coming to a close. It was just about everything the market could ask for, and stocks shot up by 1.51% on the day. For the week, US stocks increased by 1.66% and international equities were up by 0.91%. Bonds were up on the week by 0.27% but fell on Friday on the news of a very strong jobs report.

The market has rallied by 15.9% off of the December low and is now at the midpoint between the range that was established through most of October and all of November.

The US job market made it 100 straight months of increased payrolls. Nonfarm payrolls rose by 304,000. It was the biggest increase since February of 2018. Wages were up by 3% year over year. That is six months in a row of increases at or greater than 3%. The unemployment rate did increase to 4% from 3.9% in December, but the government shutdown probably impacted that number. The share of American adults working or looking for work increased to 63.2%, up 1/2% from last year. This indicates that the strong job market is pulling in workers that have been sidelined, a positive development for the economy. 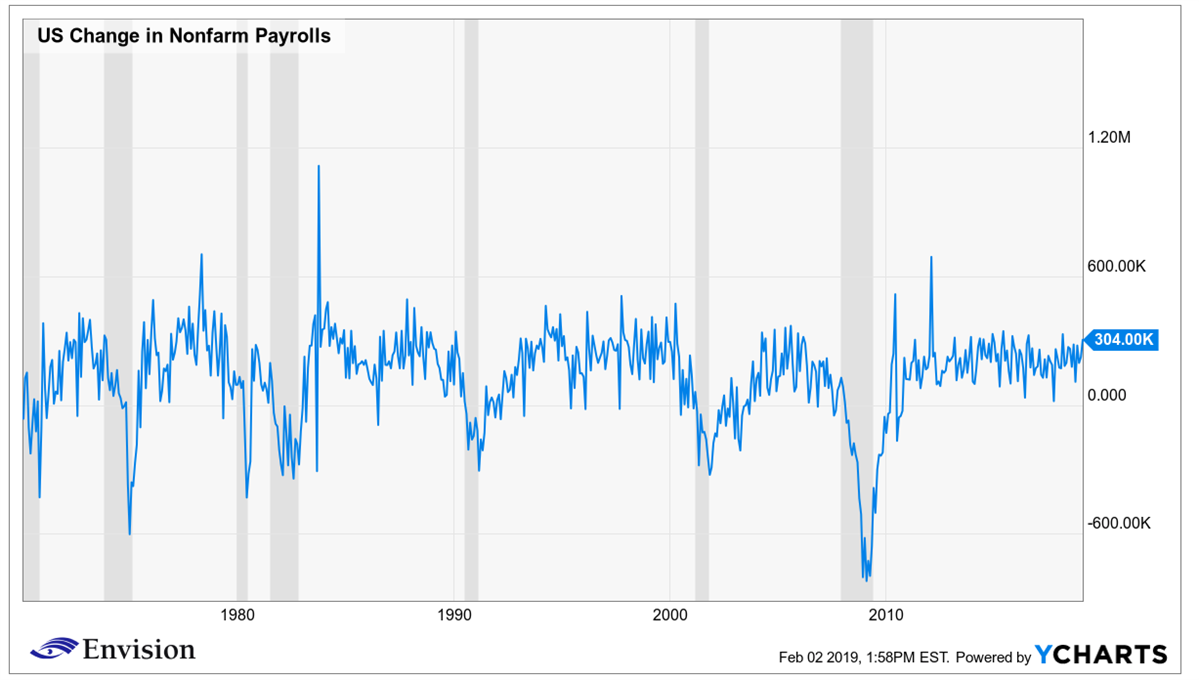 In more good news, the ISM Manufacturing Index climbed 2.3 points in January to 56.6, the biggest increase in five months.

One weak datapoint was jobless claims. After falling to a stunningly low 199,000 last week, they shot up to 253,000 this week. That was the highest level since September of 2017. The government shutdown will get the blame for now.

Overseas, the economic reports are still coming in weak. The Markit January Manufacturing PMIs fell. Emerging markets are now at an even 50.0 versus 50.5 last month, and developed markets fell to 52.2 from 52.9, greater than 50 is considered expansionary. Italy fell into a recession.

Howard Schultz, a lifelong Democrat, announced that he might run for president as an independent in 2020. The reaction was instantaneous and vicious. Democrats and the media establishment went on a rampage trashing Shultz in every way possible, from his intellect to his wealth to the way he ran Starbucks. Most of the "comments" and accusations were caricatures and inaccurate. But that is what goes for public discourse nowadays. With both parties currently ruled by the extremes, it would appear there is an opening for someone close to the center. Schultz will test the waters and consider filling that gap.

Cory Booker announced that he will run for president. Booker's initial comments were positive and focused on uniting the entire country, "We used to be a people who could look at the sky, point at the moon and change it from a dream to a destiny. There's no Democratic or Republican way to get there. You definitely don't get there by fighting each other, tearing each other down or dividing people against each other." Booker joins a field that includes Kamela Harris, Elizabeth Warren and Kirsten Gillebrand.