It was another strong week in equity markets around the world. US stocks advanced by 3.06% and international markets rose by 2.06%. Stocks closed higher than they opened every day this week, and on Thursday and Friday, the market closed at the high for the day.

So far it has been a sharp "V" shaped recovery in prices, but we are now essentially back to the point where stocks fell through support on December 14 (see 8 below). The support level of about $133 (on the VTI) now is resistance. This is an important technical level and how the market reacts to it may give a hint to where we go from here. Although stocks did close at the high on Friday, they could not crack the Thursday high.

When stocks fell on December 24th by about 2.7% the S&P 500s 10-day advance/decline line was measured at -2,440 according to the Bespoke Investment Group, the lowest level since 2011 and indicative of extreme negative sentiment. As of Wednesday, the level was at 1,938. The positive change of 4,378 was the largest ever.

After the market fell through support on December 14, the drop accelerated the following week when investors perceived that they did not get the "dovish" increase in interest rates that they were hoping for. Since then, the Fed has walked back on those comments and is now in the camp of responding to the data, watching the markets and being patient.

Another big drag on stocks has been the threat of a trade war. News on that has also improved. The US and China have continued recent talks on settling the dispute.

While news on the Fed and China have improved, the government shutdown continues and is now the longest ever. Expect the heat on that to begin to ramp up quickly. Merrill Lynch estimates that the shutdown costs the economy 0.1% in growth every two weeks.

The recovery in equities has been matched, may be exceeded, by that in high-yield. The US High Yield Option-Adjusted Spread which ballooned to a high of 5.44% on January 2, has now fallen by almost 1% to 4.54%. The dramatic fall in rates is reflected in the rally by the Invesco Senior Loan ETF (BKLN) that we highlighted back on November 23.

Earnings estimates for the S&P 500 (source: Refinitiv) continue to fall week by week. 2019 estimates are down by 3.8% since the September 7 peak. 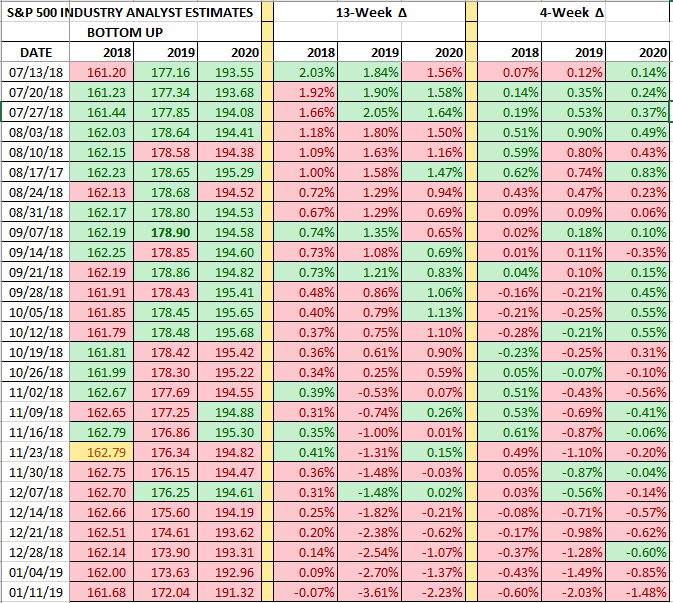 Initial reports of a strong holiday season for some brick and mortar retailers turned out to be false. "The holiday season began strong - particularly Black Friday and the following Cyber Week, but weakened in the mid-December period," according to Macy's Chief Executive Jeff Gennette. Macy's said same-store sales were up by 1.1% for November and December but lowered their sales and profit forecasts for the current year ending in February. The stock fell 2.64% on the news and was joined by retailers like Kohl's, L Brands and JC Penny.  The news from Target was positive, sales were up by 5.7% from November 4 through January 5 and Costco had a 7% increase for the five weeks ended January 6.

Ford has begun talking to trade unions about cutting thousands of jobs in Europe as it cancels production of unprofitable models. The move is part of a company-wide cost-cutting program to help adapt to the fast-changing dynamics of the auto industry, specifically electric vehicles and autonomous driving. The move has been amplified in Europe with a slowing economy that has been impacted by Brexit and an economic slowdown in China.

In addition, Jaguar Land Rover, is expected to cut 5,000 jobs due to weak demand from China and a decline in diesel sales in Europe.